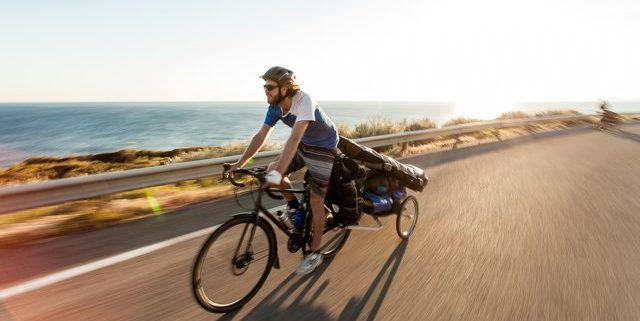 ô¨ô WeôÇve got to stop once in a while and let our spirit catch up.ô ô£

EverythingôÇs getting faster and faster nowadays. This project was an experiment to slow down living, or rather try to find a way of going slowly and to experience travelling to the fullest. By bike from the southern part of Austria to the mediterranean sea like Liguria and Sardegna was the first part of this adventure. Another very important goal was to catch up with local people, to immerse deeper into the local culture and to find waves in a country which isnôÇt that famous for surfing.

The Idea:
At first sight it isnãt obvious that Austrians practice a sport like surfing. To reach the nearest reasonable and consistent surf spot takes at least 700 kilometers by car. Despite this circumstance there is quite a large number of surfers in Austria. Most of them got into surfing via other sports like snowboarding or skateboarding. Once hooked you spend a good deal of your spare time to follow your new passion. The trips become longer and more exotic. You travel thousands of kilometers by plane and car to get to your desired destinations. However on a closer and a more down-to-earth look it is clear that the costs and the ecological foot print is way too big. So you try to justify your long distance travels with arguments like getting to know other cultures in order to understand and respect them. In truth you find yourself on paths and places which are shaped by tourism and do not represent the local culture at all. Real contact to the local culture is mostly limited to a few random situations.
How can a journey look like to leave these ready-made paths where not only the start and the destination is known, but also everything in between? Is it really necessary to travel the whole world just to satisfy the highly individualistic need for clean waves in easy conditions which suit surfers coming from a land-locked country like Austria?

On the quest for answers to these questions we depart on an adventure by bicycle from Austria to Sardinia. Certainly the trip is going to be much more long-winded and exhausting than it would be by car, but it is also very exciting when a trip to Sardinia turns into a real voyage all of a sudden. Somehow we forgot what a voyage is. Nowadays we are just changing places. We enter a plane and a few hours later we leave it in another world with another culture, but we donãt experience the change on the way. A wisdom of the native americans says that from time to time you have to stop and reflect if you travel with high velocity in order your soul can catch up with you. Maybe a grain of truth can be found in this. Anyway, a voyage by bicycle opens up new ways and possibilities far away from crowded highways. We will find ourselves on lonely roads and paths where fewer but maybe much more interesting people travel and where nature can surprise us every moment. Without car and plane, by foot or by bike, you get a new point of view for many things and explore the world differently.
We embark on our journey to meet many fascinating people, experience adventures and of course the hope for many unforgettable surf sessions.